The Man Behind Dynavision 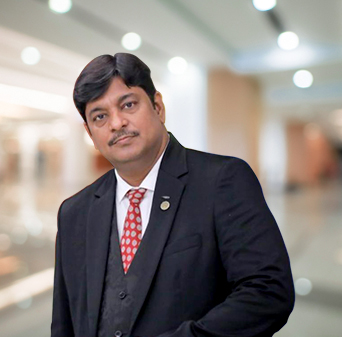 Amit Sharma was born in Kolkata in 1973 in a pious family of priests and right from his childhood, he was strongly impacted by the humanitarian values he saw around him, which soon led to his inevitable inclination towards social causes.

As he grew, his belief in the Givers Gain Philosophy grew as well! As a result, he worked immensely for the Dadhich Community in the field of Education and Women’ Empowerment and even launched the first ever website for any social organisation in 1999 – the www.dadhichparishad.com.

After graduating from Calcutta University and also completing his MBA, he decided to follow his entrepreneurial passions! He started his business in 1996 as a small Computer Peripherals & accessories supplier from a residence at Burrabazar of Kolkata, West Bengal and named it Dynavision Corporation, and soon took it to unimaginable heights. As the Founder and Managing Director of Dynavision Group and an established businessman, he had been the Convener for the COMPASS IT Fair – which is the Eastern India’s Largest IT fair. He has also served as the Head of Committee for Anti Piracy Cell, Membership Drive and IT Directory in COMPASS. He successfully ran the Knowledge Empowerment and Training Program for students of the weaker section under his pilot dream project named iDream.

Amit Sharma has always been enthusiastic about making a difference and being proactive. Since his younger days, he had taken up leadership roles at many organisations like Calcutta Chamber of Commerce, BNI Prudent Chapter, Vipra Foundation, Rajasthan Brahman Sangha, Concern for Calcutta, Calcutta Citizens Initiative, West Bengal Welfare Society, Friends of Tribal Society, Rajasthan Samaras Manch, Lions Club of Calcutta Elite, etc to name a few. He was actively involved in the Mentor with Savera project that worked for under privileged children. He is also actively associated as a Mentor for the Shri Gandhi Vidyalaya – a school for the slum children of Entally area.

At 23, he became the youngest elected trustee of two public trusts – the Maharshi Dadhichee Seva Trust and the Saptarishi Seva Trust. With a yearning to empower through knowledge & uplift the weaker sections of the society, he undertook various projects, especially in the Sunderban Area like Sarva Shiksha Abhiyan, SUDA, MORD (a project of Ministry of Rural Development) where he helped to educate 7700 plus students and placed them at various positions in places like ITC, CCD, Big Bazaar, Barista etc.

Being the entrepreneurial as well as social achiever that he is, Amit Sharma has won numerous awards and accolades for his endeavours. Some of those pride moments include being awarded ‘SHRESHTHA SAMMAN 2015’ by Governor of West Bengal, “DADHICH RATNA SAMMAN 2016” by All India Dadhich Mahasabha, International recognition by BNI Global “Hall of Fame Award” 2017, 2018 & 2019 “Leader of the Year 2019” Heights Regional Award of BNI KOLKATA CBD (A) “Emerging Lion of the Year 2016-17” Award by Lions Club International Dist 322B1 and “International President Leadership Medal” 2018-19 by Lions Clubs International, to name a few.

Recently, he was appointed as the member of Eastern India Regional Council – EIRC of Institute of Company Secretaries of India. As the Chairman of Organising Board of BNI Business & Beyond 2019 – he conceptualised, strategized and executed the biggest Business Event of Eastern India with exhibitors and participants from India and Abroad. Amit Sharma has truly been a beacon of excellence and inspiration to one and all!

Copyright © 2020 Dynavision
Powered by: The Arham